The Journal of Political Science is being edited by Head of Department under the patronage of Principal of college. Presently, Dr. B B Sharma is the Editor of this journal and other members of the department are the Associate Editors.

This Research Journal is recognised as one of the leading journals in Political Science at home and abroad and has been assigned ISSN No. 0976-8254. It is also registered with the Registrar Newspaper of India, Government of India, New Delhi under No. PUNENG/2005/18316. The journal is also recognised by the International Political Science Association, Paris and its contents are uploaded on its official website.

This Journal has the honour of having contributions from prominent scholars in USA, Brazil, Germany, France, and India. It has wide circulation at home and abroad, and is serving the academic needs of students and scholars of Political Science. 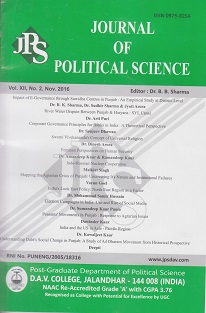